The Little Book of Waterstop, as Featured in Concrete International

We're pleased to be featured in the November 2013 issue of Concrete International — the official magazine of the American Concrete Institute.

Our waterstop reference manual, The Little Book of Waterstop, is featured on page 61 and the brief review is appreciated. However, the review incorrectly lists this blog as the download site for the free iPad book, when in fact the correct download location is here: https://itunes.apple.com/us/book/the-little-book-of-waterstop/id602431911?mt=11 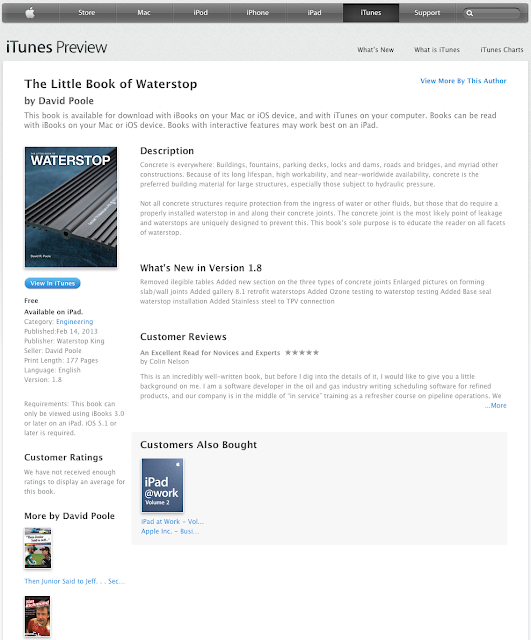 
Base seal type waterstops are renowned for their ease of installation, as the below installation guide illustrates. From initial placement to final pour, installation involves only four easy steps. Please contact our Technical Sales Department if we can be of any assistance for your waterstop installation needs. 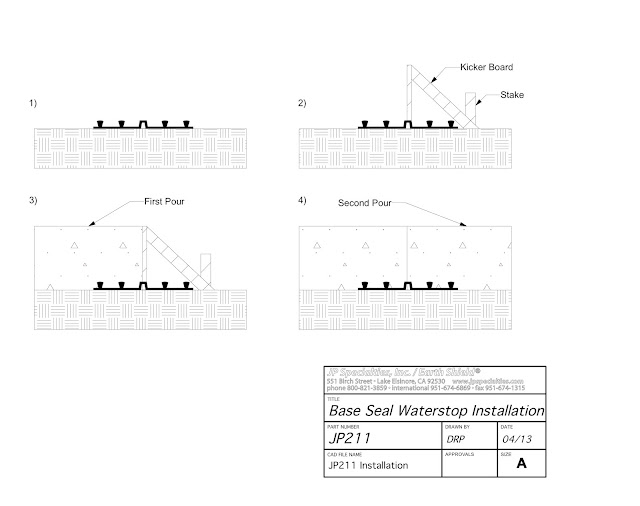 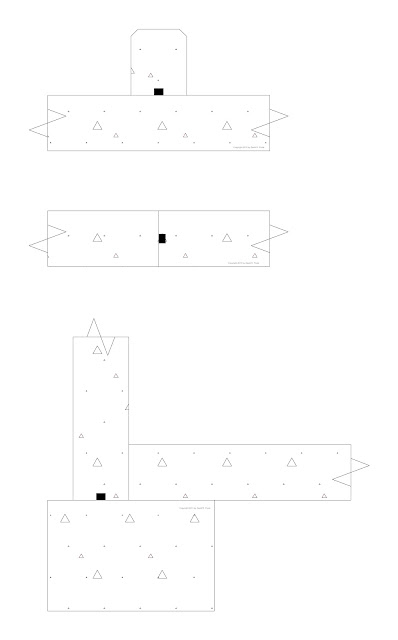 Contraction Joints - Used to divide large pours of concrete into smaller structural units, contraction joints create a man-made plane of weakness to regulate and control (another name for a contraction joint is a control joint) the location of a crack formed by moisture loss of concrete. Without this formed contraction joint, the concrete would freely crack in unexpected and unattractive locations.
Construction Joints - an interruption of the concrete pour 30 minutes or greater creates a construction joint.
Expansion Joints - Designed to negate the compressive forces from abutting concrete structures that may occur as a result of expansion, loads, or differential movement from settlement. Expansion joints require an actual gap between the concrete pours, which is frequently filled with a compressible joint filler material such as foam, rubber, cork, or cane fiber board.
Posted by David R. Poole at 7:35 PM 1 comment:

Beginning April 1st, 2013 we will be in our brand new corporate headquarters and manufacturing facility in Murrieta, CA. Our new address is as follows:

We look forward to serving our customers from our new facility. This is an exciting time for us, and we are grateful for all the business that has fueled this growth and change.
Posted by David R. Poole at 6:52 PM No comments:

Designed and detailed for our customers who have fuel containment wall joints with hdpe liner underneath the containment slab. Earth Shield® high density polyethylene waterstop (HDPE) easily welds to most liner embeds and T-Locks. 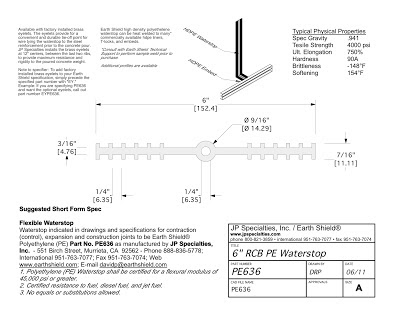 Water for Life — From The Little Book of Waterstop


Life as we know it is unsustainable without water. Water is so essential for life that civilizations have risen and collapsed, due to their capacity, or lack thereof, to harvest a continual supply of water.

Without question, water along with oxygen is our most precious resource, and great care must be taken to protect it. Governments around the world have recognized this fact and have crafted byzantine codifications mandating protection protocols, treatment programs, and storage and distribution regulatory requirements.

The most predominant problems facing the world in regards to water are:


While quantity effects many nations, quality is primarily a problem of the developing world. Modern water treatment systems throughout the developed world have eradicated most deadly pathogens, and thankfully your nightly news is not filled with stories of outbreaks of cholera or typhoid.

Because water is such a finite resource, and so basic to our survival, we must take every possible precaution in safeguarding it throughout its entire lifecycle: extraction, treatment, storage, distribution, and process. 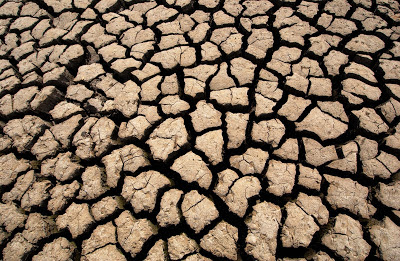 Concrete is the preferred building material used in regards to water structures. Whether it’s a megalithic concrete dam, holding back tens of millions of gallons of water, or pretreatment and treatment units at your municipal water treatment plant, you will see that it’s made of concrete. Concrete is a great building material for water structures, as it is can be made fluid-proof and strong; has a very long lifecycle; and is relatively easy to manufacture and install almost anywhere in the world. On the downside, concrete can not be truly functional without the addition of joints, and joints will leak unless adequate provisions are made to fluid-proof them. This is the primary function of waterstop: to prevent the passage of fluids through concrete joints.

From "The Little Book of Waterstop" by David Poole

Just Illustrating on a Sunday Night 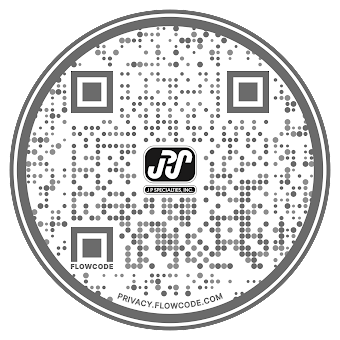