I am proud to announce that J P Specialties, Inc. now manufactures PVC waterstop. Earth Shield® Polyvinyl Chloride Waterstop (PVC) is the perfect solution for most water and wastewater applications. Earth Shield® PVC Waterstop is manufactured from prime virgin resin and is the trusted choice for environmental engineered concrete structures.
Posted by David R. Poole at 12:01 PM No comments:

To understand what a waterstop is, it is helpful to understand what it is not. Waterstop will not prevent the migration of moisture through a concrete slab, protecting the installed flooring system (such as tile or hardwood) from adhesion failure or deterioration. Nor will waterstop have any effect on capillary water migration through concrete walls. Vapor barriers, drain boards, concrete admixtures, bituminous wraps, flashings, and multiple other construction products are available to the specifier, contractor, or end-user for these criteria and there are many good books written on the subject.

Waterstop has a singular purpose: To prevent the passage of fluids across and along concrete joints. Waterstop does all of its work at the joint. Because concrete joints are frequently open and subject to hydrostatic loads, a strong case states that waterstop has the most critical role in fluid-proofing a concrete structure. A pinhole or imperfection in a vapor barrier will have little to no noticeable effect, but even the slightest defect in a waterstop product or its installation can be truly catastrophic to the fluid-tight integrity of the building envelope.

The first waterstops used in construction were strips of lead or copper. In the early 1900s, the preferred waterstop material shifted to vulcanized rubbers such as neoprene or styrene butadiene rubber (SBR). While rubber waterstops had excellent mechanical properties (high tensile strength and elongation) they had one major weakness: they were challenging to fabricate as the rubber was vulcanized, meaning it had already taken a “set” (thermoset) and could not be heat welded together like the metals used previously.

In 1926, Waldo Semon of the B. F. Goodrich Company invented plasticized PVC. Semon was attempting to dehydrohalogenate (non-plasticized) PVC in a solution of boiling solvent to create an unsaturated polymer that would be useful for bonding rubber to metal. The results of Semon’s experiment was the creation of a thermoplastic with properties very similar to rubber.

It took many years for plasticized PVC to find suitable commercial applications, and was first used as a waterstop material in the early 1950s. Back then, the material was properly labeled as fPVC or flexible PVC. The first wide-scale test of any waterstop was performed in 1954 by the Hydro-Electric Power Commission of Ontario, Canada. Many manufacturers still use the results of this test as a benchmark, and other than some new polymers, waterstop has not changed that much since then.

Earth Shield® HDPE Waterstop is a specialized thermoplastic that is ideally suited for hot petroleum oils, diesel fuel, aromatic hydrocarbons, industrial solvents, and other aggressive, non-polar fluids that would cause significant softening and swelling of other waterstop polymers.

Earth Shield® HDPE Waterstop is available in many of the same shapes and profiles as our industry-leading, chemical resistant, Earth Shield® TPV polymer.

Install Earth Shield® HDPE Waterstop in all concrete joints. Waterstop should be centered in, and run the extent of the joint. All changes of directions should be prefabricated (see Shop Made Fittings), leaving only butt-welding for the field. If installing in an expansion joint, keep center bulb unembedded to allow it to accommodate movement as designed. Use our factory-installed brass eyelets or #3 hog rings and tie wire to secure waterstop to reinforcing steel to avoid displacement during the concrete pour. Splice straight lengths of waterstop and Shop Made Fittings to straight lengths, with an ST-10® In-Line Waterstop Splicer with the iron temperature set to 410°F to 430°F. More detailed installation instructions are in our Standard 3-part Specifications. 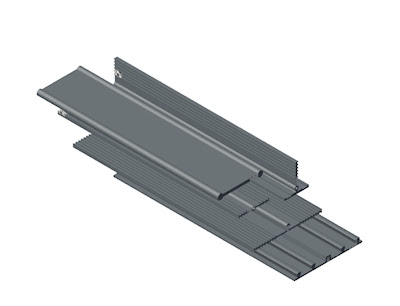 Flat strip waterstop is installed most often in below grade applications, with limited movement. Flat strip waterstop functions in construction and contraction (control) joints. Both JP637 and JP937 are all 3/8” thick... The largest and thickest profiles available in the industry! Like all our thermoplastic waterstops, Earth Shield® flat strip waterstop can be heat-welded using a standard waterstop splicing iron allowing for easy field fabrications and enable the waterstop to function as a continuous, homogeneous, fluid-tight diaphragm. Waterstop directional changes are available along with straight roll stock. Custom, fit-to-print waterstop modules are produced to order. Prefabricated ells, tees, tank pads, column fittings, and many others are in stock and ready to ship.
Posted by David R. Poole at 5:11 PM No comments:

We currently have two positions to fill: Welder/Fabricator and Extruder Operator. Great pay and benefits included. If you're interested in learning more, please contact us at jpspec@jpspecialties.com
Posted by David R. Poole at 5:30 PM No comments: