ROANOKE, VA -- The U.S. Environmental Protection Agency announced today that a chemical distributor in Roanoke, Va. has agreed to pay a $43,967 penalty and complete more than $200,000 in safety improvements to settle alleged violations of federal environmental laws designed to protect and inform the public about hazardous chemicals.


The company, Chemicals and Solvents, Inc. (doing business as Chemsolv, Inc.) is located at 1111 Industry Ave., S.E., Roanoke.  The settlement applies to Chemsolv and Austin Holdings-VA, LLC, owner of two of three properties that make up the facility.


According to an EPA complaint, the alleged violations include the facility’s lack of fire protection, inadequate secondary containment, and improper storage of incompatible chemicals.  Other violations concern the company’s failure to fully implement its risk management program that is designed to help prevent chemical releases, and the company’s failure to submit required documentation to state, county and local officials for the facility’s numerous hazardous chemicals. States and communities can use this information to improve chemical safety and to protect public health and the environment in the event of a release.


The settlement announced today follows up on an EPA order in June 2008 for Chemsolv to take extensive measures to ensure that its storage facilities complied with industry standards and risk management program regulations.  To comply with the order, Chemsolv rebuilt two large warehouses at the facility.


In the settlement, Chemsolv has agreed to pay a cash penalty of $43,967, and to implement two additional safety upgrades that exceed regulatory requirements: (1) installation of a nitrogen blanketing system on 20 storage tanks containing flammable materials at a cost of $153,000, and (2) installation of a dry disconnect system on hoses at the facility, which will eliminate drips and accidental spills during loading and unloading of chemicals, at a cost of $63,000.  In the settlement documents, the company neither admitted nor denied liability for the alleged violations.

Penn Yan, NY — The Department of Environmental Conservation released its revised recommendations on mitigating the environmental impacts of high-volume hydraulic fracturing “fracking” July 1.
Those opposed to the practice argue that the recommendations allow the state to apply double standards to protecting drinking water supplies.
The recommendations contain these major revisions:
•High-volume fracturing would be prohibited in the New York City and Syracuse watersheds, including a buffer zone.
•Drilling would be prohibited within primary aquifers and within 500 feet of their boundaries.
•Surface drilling would be prohibited on state-owned land including parks, forest areas and wildlife management areas.
•High-volume fracturing will be permitted on privately held lands under rigorous and effective controls.
•DEC will issue regulations to codify these recommendations into state law.
The Department’s review has resulted in recommendations for controls on high-volume fracturing on private lands such as:
Protecting Drinking Water
• Well water and other water protection: No permits would be issued for sites within 500 feet of a private water well or domestic use spring. No permits may be issued for a proposed site within 2,000 feet of a public drinking water supply well or reservoir at least until three years of experience elsewhere have been evaluated. No permits will be issued for well pads within a 100-year floodplain.
•Additional Well Casing to Prevent Gas Migration: In most cases, an additional third, cemented well casing is required around each well to prevent the migration of gas. The three required casings are the surface casing, the new intermediate casing and the production casing.
• Spill control: Flowback water on site must use watertight tanks within a secondary containment. No open containment may be used. Secondary containment for all fracturing additive containers, additive staging areas and flowback tanks will be required.
• Stormwater Control: Strict stormwater control measures will be required.
Regulating Water Withdrawals
A special permit will be required to withdraw large volumes of water for industrial and commercial purposes.
All withdrawals from surface water bodies will be subject to limits to prevent impacts upon ecosystems and other water quantity requirements. Identification of the water source an applicant intends to use will be required. An annual report must be issued on the aggregate amount of water it has withdrawn.
Applicants must have DEC-approved plans for disposing of flowback water and production brine. DEC would institute a process to monitor disposal of flowback water, production brine, drill cuttings and other drilling waste streams that is similar to the handling of medical waste.
Taking Localities into Account
DEC would notify local governments of each well permit application for high-volume fracturing. Applicant must certify that a proposed activity is consistent with local land use and zoning laws. Failure to certify or a challenge by a locality would trigger additional DEC review before a permit could be issued.
Identifying Fluid Chemicals
The 2011 environmental report identifies 322 chemicals proposed for use in New York and includes health hazard information for each as identified by the NYS Department of Health. Applicants must fully disclose to DEC all products utilized in the high-volume fracturing process. Applicants must agree to publicly disclose the names of the additives, subject to appropriate protections for proprietary information. Operators will be required to evaluate using alternative additives that pose less potential risk.
Protecting the Air
Enhanced air pollution controls on engines used at well pads will be required. DEC will monitor local and regional air quality at well pads and surrounding areas. The use of existing pipelines will be required rather than flaring gas.
Conserving Habitats
Disturbing the surface of the land is strictly restricted in forests of 150 acres or more, or grasslands of 30 acres or more, by requiring applicants to comply with best management practices.
The DEC report says the 2009 SGEIS did not adequately consider the community and socioeconomic impacts of high-volume fracturing. DEC officials say they have engaged independent consultants to thoroughly research these types of effects, such as:
• Socio-economic conditions including positive and negative impacts.
• Transportation infrastructure, current road use and the impacts of increased traffic.
• Visual and noise impacts.
DEC expects the research to be completed by July 31. This research will be considered and reflected in the final draft of the report.
Upon final adoption of the permitting standards, DEC will implement a system of oversight, monitoring and enforcement with close consultation with local governments and communities.
A High-Volume Hydraulic Fracturing Advisory Panel, composed of outside environmental and industry experts and local government representatives, will be charged with developing recommendations for:
• funding to ensure the proper oversight, monitoring and enforcement by state and county agencies responsible for drilling activities and reviewing water sampling data.
• measures to minimize socioeconomic and other impacts on local governments and communities;
•a fee structure for drilling development.
• a mechanism for the funding of infrastructure improvements.
Copyright 2011 The Courier. Some rights reserved
Posted by David R. Poole at 11:02 AM No comments: 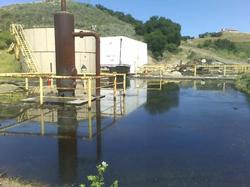 Approximately 250 barrels of mostly produced water and crude oil spilled at the Greka Oil Lease facility in Santa Maria, according to the Santa Barbara County Fire Department.
Representatives from Greka, the fire department, the Department of Fish and Game, and County Petroleum responded to the scene at 9:16 a.m.
Crews say the spill was a result of an over-filled produced water tank. The spill did not affect local wildlife, and was within secondary containment, according to the fire department.
Special thanks to KSBY News for reporting.
Posted by David R. Poole at 11:19 AM No comments:

A hazardous material is defined as having one or more of the following characteristics: ignitable (NFPA 49), corrosive, reactive, or toxic. The Environmental Protection Agency (EPA)-listed wastes are organized into three categories under RCRA: source specific wastes, generic wastes, and commercial chemical products. Source specific wastes include sludges and wastewaters from treatment and production processes in specific industries such as petroleum refining and wood preserving. The list of generic wastes includes wastes from common manufacturing and industrial processes such as solvents used in degreasing operations. The third list contains specific chemical products such as benzine, creosote, mercury, and various pesticides.